A Roman parrot in the park

Hello! I write to you now from Santa Monica, a couple days in Rome and 22 and a half hours of travel later.

The trip is over.

Dan has gently suggested that I stop using the adjective "stupid" in a sarcastic way to describe things that are beautiful. So instead I'll explain the vacation this way:

It was BELLISIMO. It was a joy. It was nourishment. It was romantic. It was an adventure.

It was a dream in rustic colors with a symphony of sounds: The clang of cups onto saucers, the steaming of espresso, the screeching of birds, the sharpening of steak knives, the sustained honks of angry drivers, the beeps of bus tickets and our involuntary "MMMmmm" eating sounds.

Here are some highlights from our last few days in Rome. 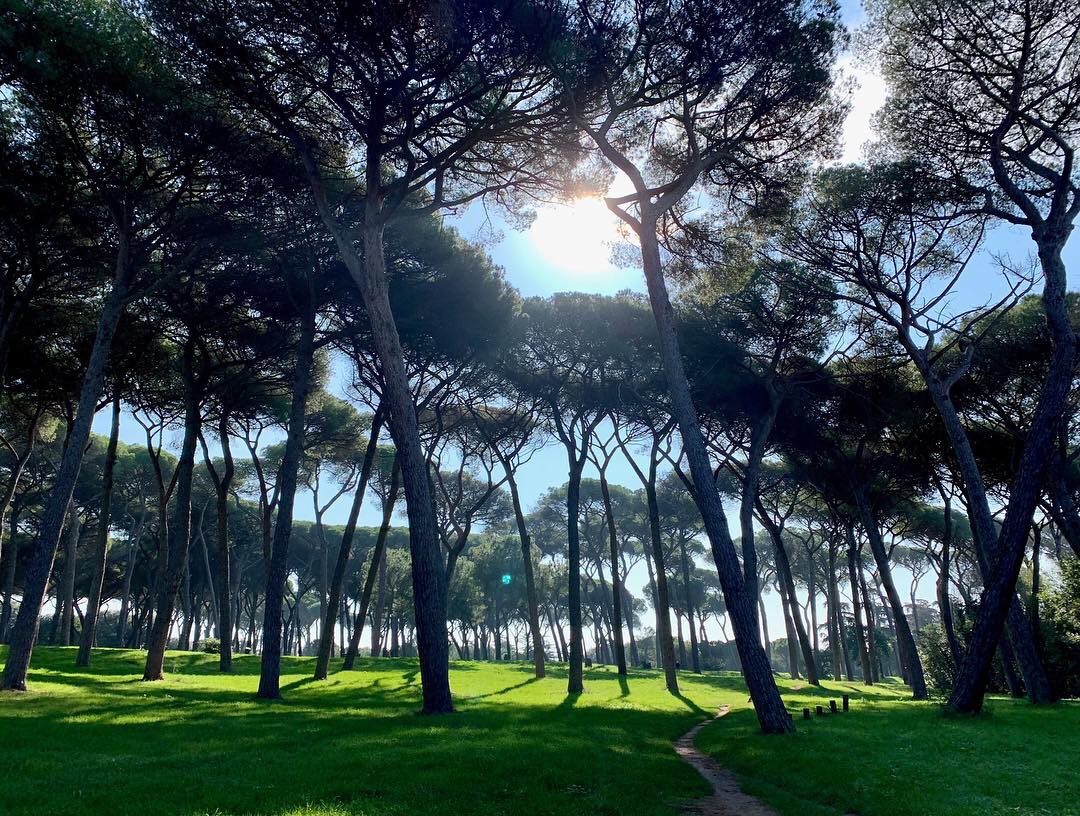 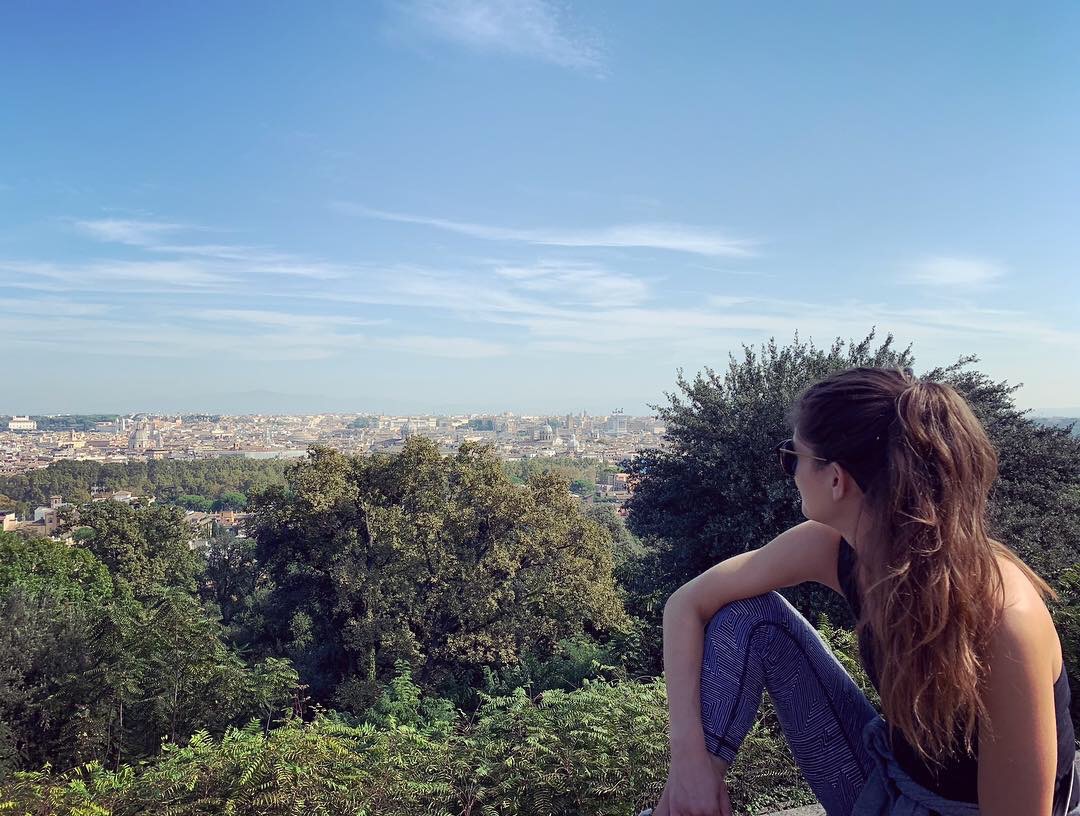 I love running along the beach. But jogging in the greenery alongside swans, beneath stone pines and among ancient statues? It's better. Dan and I spent two mornings at the Villa Doria Pamphili because being out at the park was an energizing start to the day. We walked the grounds, jogged around the water, greeted turtles, tried to figure out what the chatty parakeets were going on about, found a pull-up bar, watched a girl in a Barbie T-shirt learn to ride a bike ("Brava, brava!" said her dad) and also spotted a man with a rainbow-colored bird ("Bellisima," a passerby said) going out for a walk. He pushed the parrot in the air with its tail attached to a rope, then followed the bird's flight.

We let Rick Steve's app guide us through the Jewish Ghetto which, fun fact, is where we get the word "ghetto" from (the Italian getto means foundry, and one was near the neighborhood). It is also where the Jews were forced to live, under strict curfew.

Though the area that's a bridge walk away from Trastevere used to be in a flood-ridden undesirable location, the real estate now is very valuable. We ate at traditional Jewish restaurant Nonna Betta, which is famous for their fried artichoke though there's some debate over whether it's kosher-- a version of the dish can be infiltrated by non-kosher pests?-- more here: https://www.nytimes.com/2018/05/01/dining/jewish-artichokes-rome-kosher.html

We toured the neighborhood and also came upon a fountain that Bernini didn't design, but, as the story goes, he put turtles on it because he liked Jews and wanted to add this symbol of a tough and ancient creature that carried all of his belongings on his back. 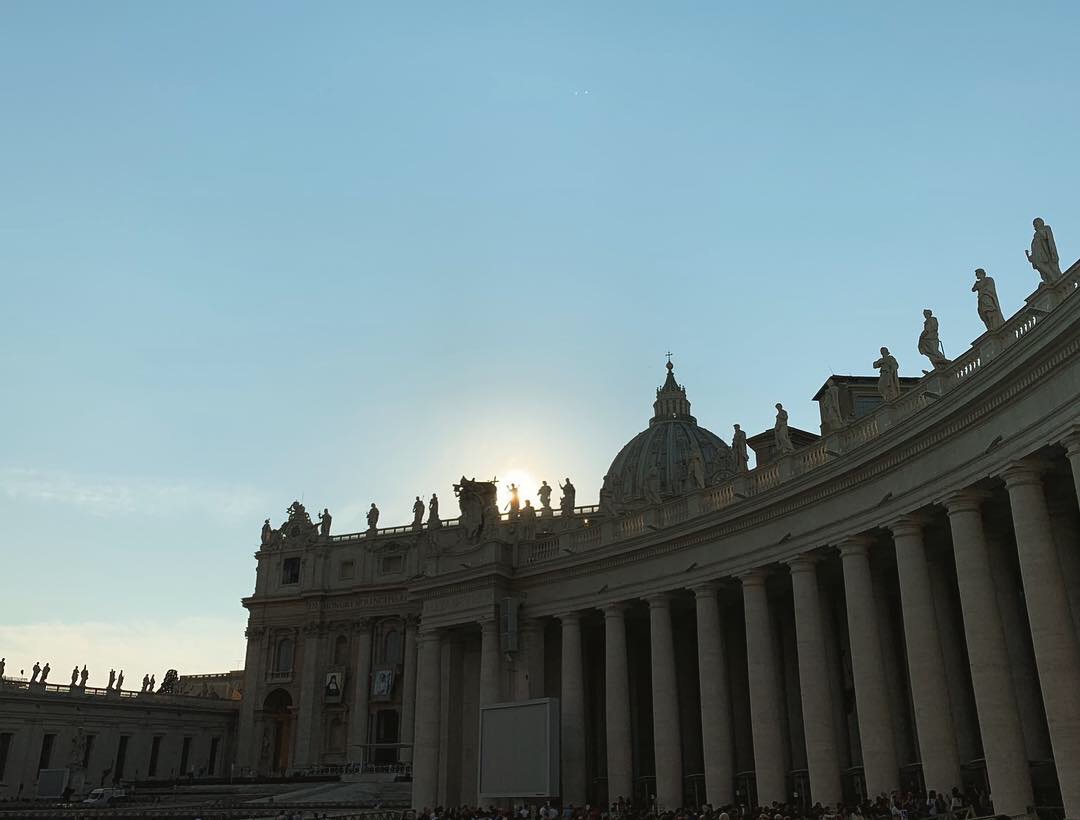 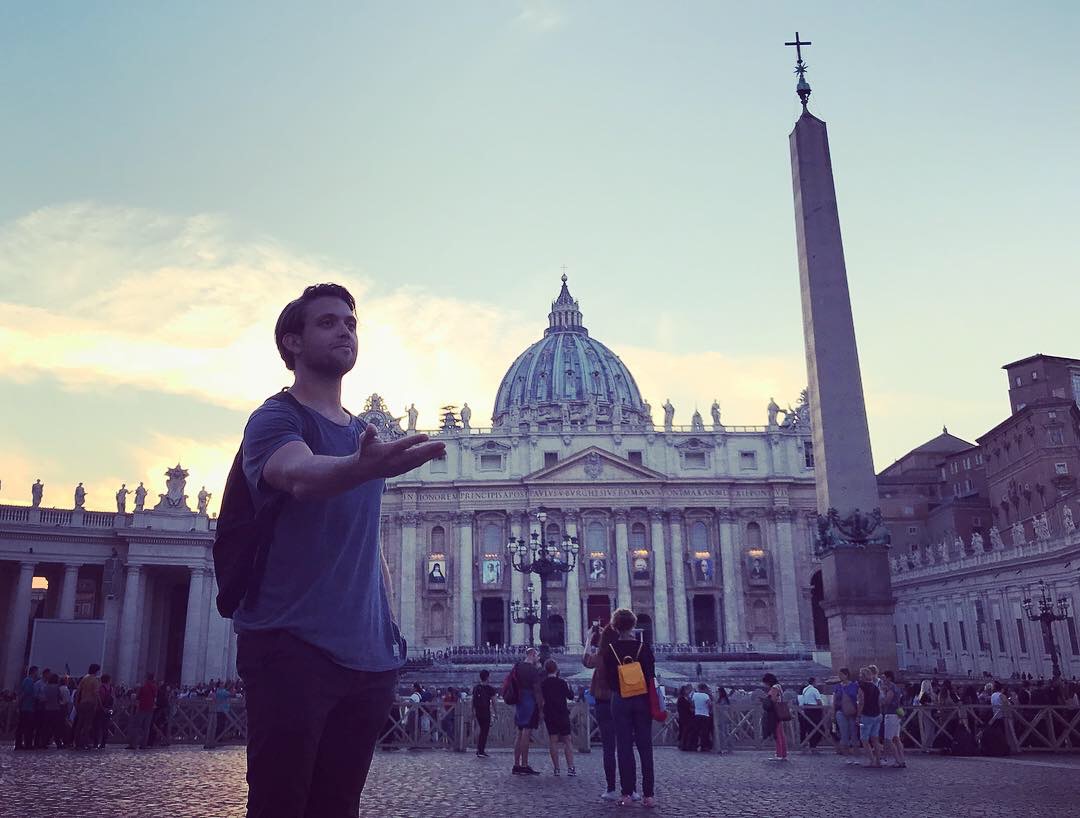 For the second time on our trip, we managed to be close enough to see Pope Francis. He was there in St. Peter's Basilica, running a service, as we toured the elaborate building that simultaneously brags about how giant it is (with marks on the floor comparing it to the smaller size of other churches) and tries to feel intimate (with pictures enlarged to appear closer to you). We admired the gold, the giant baby statues and Michelangelo's Pieta with a Virgin Mary who was sculpted so well it almost looks as though she's breathing while holding a dying Jesus.

The Swiss guards look so cool in their striped getups.

The Vatican Museum and Sistine Chapel

Here's a pro tip for Rome travelers: Take the evening tour, duck out of your tour a bit early to see the Sistine Chapel and go back through the museum on your own when it's nearly empty. Dan and I did this power move, which allowed us to see Egyptian artifacts and ancient maps without hundreds of humans and their GoPros in our way. It was also nice to view Michelangelo's Sistine Chapel, and then go back and see the muscular Belvedere statue that inspired many of its figures.

Thanks to a few-year ceiling cleaning job recently, the Sistine Chapel looks pristine. The expensive blue paint that Michelangelo used is as vibrant as it looked hundreds of years ago (as far as I know). It makes it easy to see the pettiest art diss in the world: Michelangelo painted his critic Biagio da Cesena in hell, with donkey ears and a snake eating his genitals. Nice.

We toured some rooms of Raphael's paintings and looked at the picture of Michelangelo that Raph added last-minute to one of his paintings upon marveling at Michelangelo's Sistine Chapel masterpiece, before getting kicked out of the museum.

The Pantheon oculus is awe-inspiring.

I spent a lot of time staring at the oculus and on the light circle made from the opening at the top of the Pantheon. How is this thing still standing?! It was built thousands of years ago!

We saw Rafael's grave and also the grave of Queen Margherita of Savoy, who supposedly is the namesake for the pizza.

We went back to Roscioli for a late dinner that included more mozzarella cheese, more white truffle and more meat and pasta. Dan joked that the "dishwashers have an easy job here." We didn't leave a crumb behind.

We also got a T-bone steak and wild boar tagliatelle at ll Ciak, the restaurant whose super tender meat comes from Tuscany and whose one server is a professional jetskiier that Dan has followed on Instagram since studying abroad. The jetskiier is actually coming to LA in a week and wants us to take him out on a proper American Halloween adventure. The meat was amazing, so OK fine. It was so good that we (mostly me) felt it necessary to lift up the bone and bite it like an animal. Classy? No. Fun and carnivorous? Totally.

That was our last Roman meal.

Do you ever see people wearing plain white T-shirts with "Levi's" written across the front? I saw a number of coordinating couples wearing that same logo shirt. Odd, right?

I also saw plenty of people wearing shirts with English phrases. None of those shirt-wearers were speaking English.

It's funny that typical cocktails are called "long drinks" when translated on a menu. But I haven't seen any "short drinks." I like the "long drink" name. I guess it could be used to describe any of my beverages.

The employees in the Italian airport are rude. Maybe it's because there is just one tiny smoking hot box inside with a long line so people can't get many cig breaks.

Pepto Bismal is the best. By the end of our trip, I was singing, thanking the Pepto angels for their beautiful pink gift to me.

The Jews who were made to live in a ghetto in Rome don't speak Yiddish, but their own combo of Hebrew and Italian. Dan and I now sort of have our own Yiddish-esque language, too. Apologies in advance for sounding like a Minion.

Dan and I walked, in our new Nikes, 85.6 miles. My knee and his "toe bone" were aching by the weekend. Feeling better now, though!

It's not even 7:30pm in LA right now but it feels like SO MUCH LATER. I must go to sleep.

Wearing perfume? No pork for you